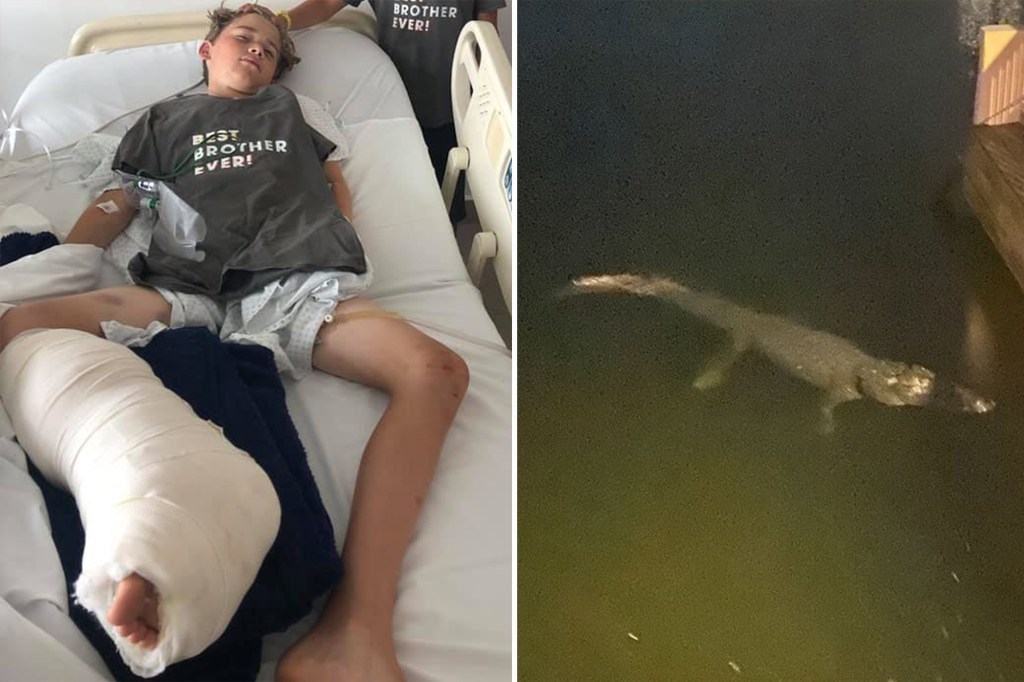 A monster crocodile chomped on a boy’s leg and dragged him underwater as he played hide and seek on a family holiday in Cancun.

Charlie Buhl, 12, said he felt like he had been “stabbed” after he was ambushed by a massive 13-foot croc that jumped out of the water and grabbed his leg.

The boy was left with horrific injuries when he was viciously attacked while playing hide and seek with his mates on the pool deck of Club Med Cancun on June 18.

Charlie was hiding with a pal on a staircase which led to a lagoon at around 8:55 pm when the croc pounced and he was suddenly yanked into the water.

He told Good Morning America: “There was nothing I could do. It was so strong.”

The boy’s mom, Jennifer, 50, told People: “Charlie kept grabbing the stairs to try to pull himself up… but couldn’t.”

She said the boys’ terrified screams were heard by a nearby mom who rushed to help.

Jennifer said a group of men also came to the rescue and one began pulling Charlie away from the croc while three others smacked the reptile with their fists and feet and covered its eyes with a pillow from the pool deck.

She said: “When they arrived, Charlie was under the water. They couldn’t see him.”

Charlie said he vividly remembers the croc “squeezing” his leg and pulling “as hard as it could”.

He said: “It felt like I got stabbed. I knew it was real, but I didn’t want it to be real.”

He added: “I remember it pulling me under twice… but when I looked, I could still see the light so I know I was only under for like, a half a second.

“At the beginning, it didn’t hurt at all. It just felt like if someone grabbed your leg and squeezed it with their hands tightly.”

“It almost felt like its teeth were holding the blood in because it hurt less with its teeth in [my leg] than when I was on the ground after.”

Charlie said a pal first told him about the “great hiding spot on the stairs right next to the lagoon”.

Jennifer said the stairs leading down to the lagoon, often used for excursions at the resort, had a metal gate with “no lock” and “no signs or warnings”.

She said she was eating dinner at a restaurant overlooking the pool when her son was attacked.

“I was described at the time like a bull in a china shop. My body was in a panic,” she said.

“I got to where he was on the pool deck and just fell on his chest. I was comforted that he was warm and he was speaking and crying… and then I just started praying because that was what came naturally.”

“There was nothing for me to do but pray.”

The ambulance took 30 minutes to arrive and Jennifer was told her son’s injuries were “extremely serious” and he “would likely lose the leg”.

The family holiday was extended by four weeks as Charlie underwent several operations in a Cancun hospital.

Doctors heroically managed to save his leg by stapling the open skin flap, Jennifer said.

He was also given 15 hyperbaric chamber treatments and was put on a Vitamin C drip.

And Jennifer has praised the resort for covering all of her son’s medical expenses.

But Charlie and his mom now want to warn others about the dangers of crocodiles in Mexico.

Jennifer said: “It’s a massive tourist attraction and there need to be warnings at the airports or hotels. The lagoon also needs to be separated better from the people with so many crocodiles in there.”

Charlie added: “I just want people to know that they can die in there.”

In a statement, Club Med said it was “deeply saddened by the incident” and “continue to provide assistance to the family”.

The hotel said it has since installed warning signs, lights and “taller fencing” to prevent further attacks, according to a statement provided to People.

It comes after twin sisters Melissa and Georgia Laurie, 28, were mauled by a crocodile as they swam at the Manialtepec Lagoon in Mexico earlier this year.

Crocodiles are fierce, cold-blooded predators which brutally attack and kill about 1,000 people a year – many more than sharks.