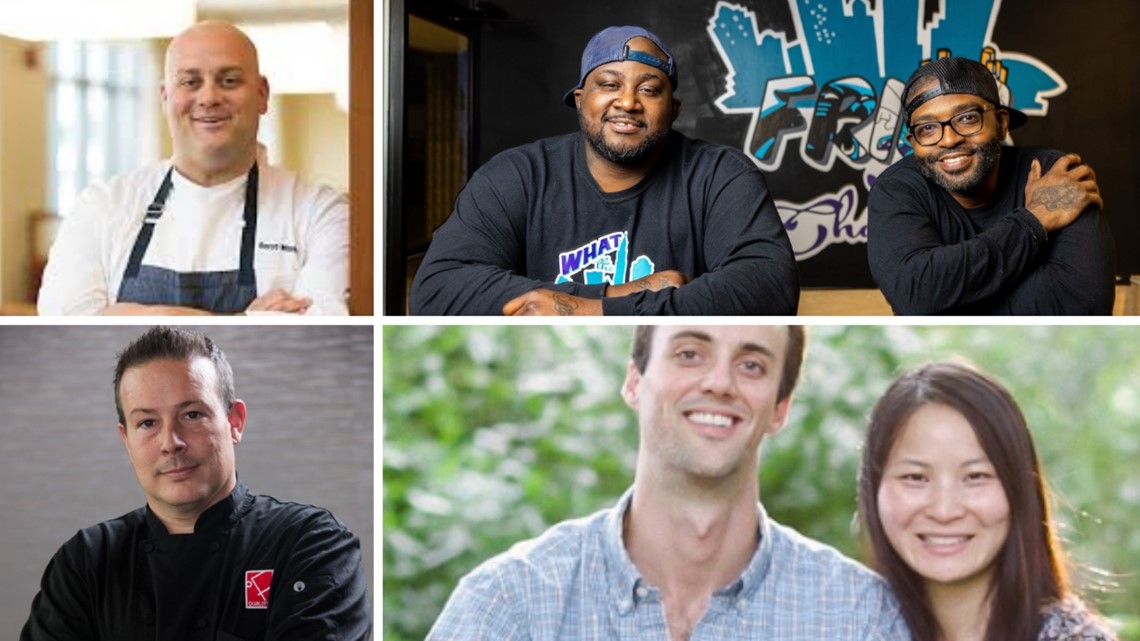 WCNC Charlotte spoke with three local restaurants that were featured in the Food & Wine article to discuss their success.

CHARLOTTE, N.C. — Charlotte was just named among the seven most exciting up-and-coming big cities for food.

“We celebrate our picks for the 11 American cities with the most dynamic and emergent food cultures,” FOOD & WINE Editor in Chief Hunter Lewis said. “Each met the criteria with their creativity, innovation, diversity, and deliciousness.”

But what made the Queen City shine in the culinary industry? WCNC Charlotte spoke with three local restaurants that were featured in the Food & Wine article and discussed their success before, during and after the global pandemic.

If you walk by The Dumpling Lady food stall in Optimist Hall or the food truck, permanently located at Resident Culture, you’ll find yourself waiting in a long line.

Though everyone who’s had The Dumpling Lady, says the lines are worth it.

Zhang Qian [in Chinese culture, the family name is written before the given name] said her humble success story started from the ground level as she worked her way up to becoming a fan favorite for Charlotte residents and visitors alike.

Zhang said when she first started her little dumpling business she was just selling them from local farmers markets. At that time, Zhang was making her dumplings at home, transporting them to the farmer’s market, and heating them up in the microwave to sell.

At the end of the day, if she had any extra dumplings leftover, Zhang said she would just trade them with other vendors for products like mushrooms or pork belly.

“So I’ll take it home and process it and make it into a dumpling and sell it again,” she said.

Zhang said when she was selling her dumplings at the farmers markets, most of her ingredients were locally sourced right there.

“It’s just a great community for us to be in and also to start a business,” Zhang said. “We’re very lucky that we were a part of the community at that time.”

As the demand for her dumplings grew, Zhang knew she needed to get a bigger space, and thus the food truck was born.

“We realized we wanted a food truck to sort of control the final cooking step of the products, to better present our products,” Zhang said.

The food truck was wildly popular, visiting several breweries and events in Charlotte and the surrounding cities. Extremely long lines formed of people wanting a taste of The Dumpling Lady.

“After the food truck, we kind of reached our limit,” Zhang said. “So with the right opportunity over at Optimist Hall we were like ‘OK this is great.'”

Zhang said having a brick-and-mortar in Optimist Hall gives them an opportunity to expand the menu.

“We offer soup dumplings, we have pan-fried [dumplings], so there’s much more stuff I’ve always wanted to present but couldn’t because of the capacity of the food truck,” Zhang said.

When talking about The Dumpling Lady being featured in Food & Wine, Zhang said she’s just lucky to be listed among other great chefs.

When asked what the future holds for this popular dumpling chef, Zhang said she wants to open a restaurant where she can provide more Sichuan dishes to Charlotte, beyond just the noodles and dumplings.

“I just think the unique flavor of the chives reminds me of my home because I grew up eating pork and chives,” Zhang said.

What The Fries, a family-run business in Charlotte, began in 2015 with chefs and owners Jamie Barnes and Greg Williams. Both of the men are founding members of the popular dinner series, Soul Food Sessions.

What The Fries began as a food truck, serving hungry and eager Charlotte residents all over the Queen City.

Customers said the fries are good enough to wait in line for. Back in 2021, when discussing the popularity of his food truck, Barnes said the lines can feel overwhelming but “it’s a good thing.”

In order to accommodate the rising popularity of What The Fries, Barnes and Williams opened a brick-and-mortar restaurant in the middle of a pandemic.

“We were doing neighborhoods with the food truck and started getting very busy,” Barnes said. “We were getting too many emails and we had already wanted a restaurant.”

The pair said they were never worried about getting customers to come to their permanent building, but rather, making sure they would have enough staffing to adequately handle the demand.

“I guess if anything, we were worried about the staffing and could we keep up with the demand,” Barnes said.

Serving up gourmet, scratch-made, fast-casual food is what kept What The Fries in the headlines. Among many local news features, What The Fries is featured in Food & Wine as well as The Cooking Channel.

“It’s pretty cool because we have a lot of respect for those guys,” Williams said about being featured among some big Charlotte restaurants.” They’ve been out here for a long time, just like us. I think it just goes to show that being on this grind and hustle, where it can get you.”

You can stream WCNC Charlotte on Roku and Amazon Fire TV, just download the free app.

When asked what excites them most about What The Fries, the two said knowing they created something that is their own.

“Something that we really worked for,” Williams said. “It’s the freedom of doing whatever we want.”

“We go with the food trends,” Barnes added. “We just try to put a more of a creative spin on it.”

When it comes to creativity, the bar is set high for What The Fries. Williams and Barnes said no ideas are off-limits.

“In here we would try anything,” Williams chuckled.

Barnes shook his head in agreement.

Williams and Barnes said they’re excited about the future. When asked what’s next for them they said maybe they’ll open more restaurants with new concepts.

“Some cool things in the future,” Barnes said. ” And of course, keeping this one going and just pushing the food how we’ve been doing.”

What The Fries is now on DoorDash so residents who want to enjoy their food no longer have to leave the comfort of their couch!

Jamie Barnes: Barnes said he gravitates to some of the newer items like the cheeseburger and fries quesadilla.
Greg Williams: Williams said he goes old school with the lobster mac and cheese

Fahrenheit, situated above the Skye Condos in Uptown, features amazing food and drinks with a rooftop view to match.

Chef-Owner Rocco Whalen opened Fahrenheit back in 2014 and has since created a restaurant that has quickly become a staple in the area.

When asked why he thinks so many people flock to his rooftop bar, Whalen credits the food and drinks, but also the beautiful backdrop.

“I will take our view against anybody else’s in the city,” Whalen said, mentioning other places in the city do have wonderful views.

Whalen said Fahrenheit serves up a variety of different cuisines.

“We do a lot of different foods,” Whalen said. “Our food is very Pacific, upmarket, moving forward.”

When you visit Fahrenheit, you could get sushi one night, Asian the next day and Whalen’s mother’s meatballs the following day.

“We want to make people happy, keep them up here,” Whalen said. “They want to stay here for drinks, for food, for the view, for everything.”

Whalen said it’s not just about them and their restaurant when he talked about their feature in Food & Wine. He said it’s really a nod to all of the great restaurants the city has to offer.

“It’s to highlight not just us, but the other neighborhood, other operators and other new sections in town,” Whalen said. “We’re just excited to be in that bundle of great chefs.”

Whalen said Fahrenheit has really leaned into social media and encourages guests to snap photos of their food and drinks.

“Snap that picture, post that on your wall, put that up on your Snap (chat) because it promotes us,” Whalen said.

When it comes to curating the best dishes for its guests, Whalen said he has a great team looking at the seasons and food trends and making sure their food reflects that.

“So for us, we curate the best people with the best palates and we try to make the best ingredients shine, just like the view and the snaps and Instagrams do,” Whalen explained.

Whalen said another thing they’re super proud of is their employees. He said he has some employees that have been with him for over seven years.

“Every one of our staff members is 110 solid,” Whalen said. “They live in South End, they live in south Charlotte. For us, locality is important.”

Whalen talked about one employee, Brittany Douglas, who worked at the Chipotle on South Boulevard nine years ago when they first hired her.

Wake Up Charlotte To Go is a daily news and weather podcast you can listen to so you can start your day with the team at Wake Up Charlotte.
SUBSCRIBE: Apple Podcasts || Spotify || Stitcher || TuneIn || Google Podcasts

All of WCNC Charlotte’s podcasts are free and available for both streaming and download. You can listen now on Android, iPhone, Amazon, and other internet-connected devices. Join us from North Carolina, South Carolina, or on the go anywhere.