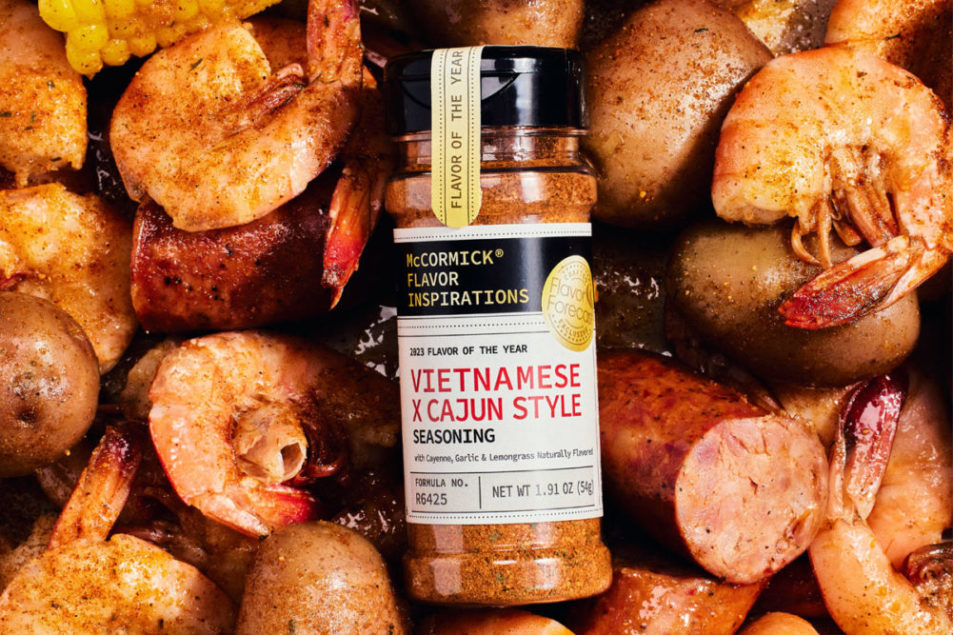 CHICAGO —November and December are the months flavor companies predict what tastes will be trending during the upcoming year. Many of this year’s projections are directed toward consumers who are moving beyond the pandemic and are determined to take control of their health and enhance the health of the planet, all while allowing for comfort, self care and indulgence.

“Consumers will always want foods that reflect the familiar flavors they know and love, but they continue to expand their palates with unique global fare,” said Hudson Riehle, senior vice president of research for the National Restaurant Association, Washington. “Consumers crave foods that challenge their taste buds at a more sophisticated level than ever before, including new levels of hot, spicy, sweet and savory.”

“Flavors that violate their expectations are sure to be a hit,” she said. “For that reason, unexpected and unique flavor combinations will be in demand going into 2023.”

Firmenich Inc., Geneva, has named 2023 to be the year of the dragon fruit, as its bold, vibrant flavor — and color — speak to what is anticipated to be a big year of change, according to the company. Firmenich partnered with Pantone, Carlstadt, NJ, a color company that has identified the 2023 color of the year as being magenta, one that happens to resemble the color of dragon fruit.

“It’s brave and fearless, a pulsating color whose exuberance promotes optimism and joy,” said Mikel Cirkus, global creative director for taste and beyond at Firmenich. “Our 2023 choice of dragon fruit reflects the global consumer’s increasingly adventurous palate and desire for the new or exotic when it comes to ingredients and taste.”

Dragon fruit already is trending in juice bars and upscale restaurants around the world. Firmenich believes the tropical fruit will be a star in packaged foods and beverages.

“Dragon fruit may be still a ‘rare’ fruit flavor for food and beverage brands, but it is no longer rare to consumers,” said Jeff Schmoyer, global head of human insights at Firmenich. “It’s possible that the initial lag in new product innovation is in part related to the challenge of realizing the flavor of dragon fruit. Our consumer research shows that the fruit can sometimes surprise people by not having the strong flavor to match its visual appearance. Instead, the taste is light, refreshing, sweet and delicious.”

On the savory side, McCormick & Co., Hunt Valley, Md., is betting on the mashup of Vietnamese with Cajun, which the company will be offering in a retail seasoning format. It is described as a “culture crush of key ingredients” that contain cayenne and paprika, in classic Cajun tradition, along with lemongrass, garlic and black peppercorn, which are customary in Vietnamese recipes.

Symrise NA, Teterboro, NJ, is focusing on what’s gaining traction in the global flavors market. The company is seeing growth in mosaic cooking, which is the melding of regional and global flavors and dishes. Autobiographical diaspora cooking also is gaining traction and describes a method where young chefs cook from their heritage and mix it with American foods as well as “mom’s recipes.”

Pinterest identified 2022 as the year of “ancestral eats,” which is fueling the trend of consumers embracing their roots, as well as learning about others, according to Innova Market Insights, Arnhem, The Netherlands.

The NRA’s 2023 edition of its annual What’s Hot Culinary Forecast identified the top three global flavor trends in foodservice. The trends, sooner than later, will make their way into consumer packaged goods.

The first is Southeast Asian cuisine, which encompasses the flavors of Vietnam, Singapore and the Philippines. Next is the Caribbean, including the native flavors of Puerto Rico, Cuba and the Dominican Republic. In third place are the flavors indigenous to South America, such as those with origins in Argentina, Brazil and Chile.

Authentic flavors and ingredients from Latin America also are gaining traction, said Rebecca Shurhay, marketing analyst, Flavorchem, Downers Grove, Ill. Beverage concepts, such as horchata, mangonada, tepache and aguas frescas are transforming into their own flavor profiles and being applied to all types of foods. The same is true for Mexican dessert-inspired flavors, such as tres leches, dulce de leche and churro.

“Latin American is still surging, and we are seeing some interesting flavors bubbling up on US menus, including tinga, aji limo and huacatay,” said Dylan Thompson, senior marketing and consumer insight manager for food and beverage at Symrise. “In sweet, we see a rise in Fillipinx, Japanese and Cuban flavors. We are also seeing a rise in flavors of global childhood sweet treats.”

Wixon, St. Francis, Wis., has been exploring and developing authentic Caribbean flavor profiles for some time.

“We have been able to capture and illustrate traditional dishes and condiments of that region, (and take them to the next level),” said Ryan Kukuruzovic, corporate chef. “Jamaican jerk has been of consumer interest for many years. We’ve built a scotch bonnet guava jerk seasoning off this fan favorite by adding additional nuances of complexity to truly elevate the flavor dynamic. It lends itself with the innate hot (scotch bonnet) and sweet (guava) inflections to a flavor profile that would give even the best ‘Memphis-flavored barbecue’ a run for the money.

“Other trending Caribbean flavors have local influence from Puerto Rican, Dominican and Cuban cuisines. They include curry, coconut, bitter orange, mojo, allspice and wasakaka. Combining these flavors, developers can add sweet-heat or sweet-savory profiles to myriad applications, from sauces and snacks to entrees and desserts. And beverages, of course. Think mocktails with sophisticated multilayered flavors.”

Mr. Thompson said Symrise is seeing Latin American flavors being used in beverages, with a focus on mezcal, as well as tepache, hoja santa, herba luisa, mamey and guanabana. There also is a growing interest in Asian influences in beverages, including a focus on complex umami flavors in cocktails and mocktails.

“Consumers are obsessed with Asian cuisine,” Ms. Cushen said. “They are craving spicy, pickled, fermented and sweet-heat flavors. Korean, Indian, Vietnamese and Thai food are seeing quite a bit of demand from consumers. Expect to see flavors inspired by these cuisines in everything from salty snacks and sauces to baked goods and frozen foods.”

Beyond Asian cuisine, Gen Z consumers have shown interest in African cuisine, Ms. Cushen said. Brands that have younger consumers in their target demographics may want to consider how they can incorporate the flavors of popular dishes from Morocco, Ethiopia and more African countries in their products.

Sweet-heat fusion flavors, especially on fried chicken sandwiches, are keeping heat relevant with mainstream consumers. This fusion of flavors is fueling sriracha variations in the condiment space, many of which may add that extra dimension to everyday foods.

Kevan Vetter, executive chef and senior director of culinary for McCormick, said to expect an evolution of heat into a multi-sensorial, layered taste experience “that pushes beyond the singularly spicy realm where heat and ingredient pairings come together to shape how heat is perceived and how long it lingers and finishes.”

Charlie Baggs, president and executive chef, Charlie Baggs Culinary Innovations, Chicago, said fire-roasted flavors are trending, especially in meats and plant-based options. The flavors may be added to any cuisine through rubs, glazes, sauces and marinades.

“We also see whiskey, cayenne, chipotle and rosemary making their way into the bakery category,” Ms. Church said. “At the same time, comforting, nostalgic flavors, such as birthday cake, PB&J, cookie butter and cotton candy, are showing up.”

Yogurt, spreadable cheeses and dips have surfaced in atypical flavors for the category. In fact, about 30 new flavor combinations launched in yogurt formats in the past year, said Lisa Jackson, director of marketing, FlavorSum LLC, Kalamazoo, Mich. Many of these have healthful halos, such as elderberry strawberry and mango ginger. Often they are a combination of an exotic fruit with a traditional flavor, such as calamansi lime and pineapple guava.

“We also expect to see an uptick in earthy flavors like botanicals, florals and mushroom,” Ms. Jackson said.

Ms. Church said, “Latin American-inspired flavors, such as tamarind, mandarin, guava, dulce de leche and tres leches cake, are growing in dairy. Further, with more people cooking with yogurt, there’s been an uptick in interest in savory flavors, such as red pepper, carrot, beet, and even sweet heat like raspberry habanero and pineapple jalapeño.”

“With the drive for comfort foods and comfort flavors and consumer demand for excitement and experimentation, the time is right for breakfast innovation,” Ms. Beall said. “Think buttermilk waffle-flavored ice cream with summer strawberry swirl and sprinkles, or creamy avocado toast. How about some overnight oats with berries and granola, or some french toast casserole with cinnamon and nutmeg?”

The insights team at FlavorSum explored innovation opportunities for “the most important meal of the day” and found a daypart that is evolving.

“In cold and hot breakfast cereals, classic flavors remain top of mind for developers,” Ms. Jackson said. “While tastes like chocolate, cinnamon, maple, honey and peanut butter topped the charts over the past three years, North American cereal brands introduced more than 80 new flavors in 2022. Launches include crossovers such as snickerdoodle and strawberry milkshake, as well as permissible indulgence flavors through mashups, such as like banana chocolate and coconut caramel.”

Flavor innovation in grab-and-go breakfast-style bars is driving appeal across dayparts, said Ms. Jackson. And while some brands prefer to align with traditional breakfast flavors such as cinnamon, honey, peanut butter and french toast, other bar brands are tapping into global flavors, such as fig with maple.

Mr. Baggs said breakfast is where there’s the most innovation with flavors. The breakfast burrito needs to make room for Asian and Middle Eastern concepts.

“Chile garlic crisp blends with any type of eggs,” he said. “You can even mix it with an aioli for a breakfast sandwich. We’re not seeing a lot of spicy dishes, but more comfort dishes with bold flavors. People are open to trying global flavors if they’re not too dissimilar to the American-style breakfasts they’re used to eating.”