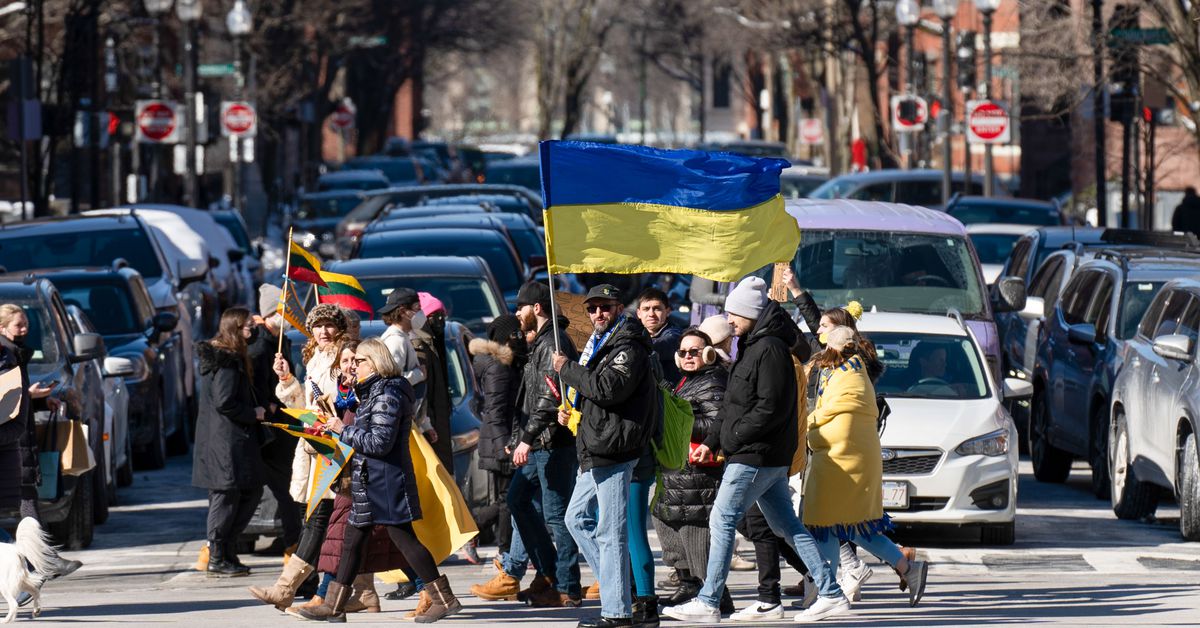 Restaurants and food businesses around the world are mobilizing in response to Russia’s invasion of Ukraine, whether by raising funds to feed refugees or providing other support in the form of money, supplies, or solidarity.

Restaurateur José Andrés’s World Central Kitchen, a nonprofit food relief organization that has become particularly well-known during the pandemic but dates back to 2010, is on the ground in Poland feeding Ukrainians fleeing across the border. The group is also working in Odesa, Ukraine, and sending volunteers to other nearby countries for extra help.

Locally, World Central Kitchen is a typical target for restaurant industry fundraisers in times of crisis, and it’s no different this time. Massachusetts-based pierogi company Jaju Pierogi, for example, donated $1000 to World Central Kitchen after pledging 20% of one day of sales in late February, and La Saison Bakery in Cambridge held a sourdough bake sale on March 2, 2022, to support World Central Kitchen’s efforts in and around Ukraine.

Boston-area businesses are donating elsewhere, too. Downtown wine bar Haley Henry, for example, gave (and matched) its March 2, 2022, proceeds from its weekly hot dog special to the Ukrainian Crisis Relief Fund by GlobalGiving. “As Ukrainians continue to fight for their land, their freedoms, and their democracy, we can’t help but try to find a way to help in whatever way we can,” the bar posted.

Below, find ongoing opportunities to donate to various organizations in support of Ukraine, as well as other updates and messages of support from local food businesses. This list will be updated; email [email protected] with any information.

As part of Bakers Against Racism’s #BakeForUkraine initiative, Breadboard will be selling blue-and-yellow peace sign cookies and sour cherry sunflower sourdough to raise money for CARE in support of its work in Ukraine, with all proceeds from these two items going to the organization. Preorders begin March 3; the cookies will be available starting March 4, and the bread will be available starting March 6.

The local cake shop is doing a “Funfetti for Ukraine” fundraiser, donating $5 of sales from each funfetti cake jar, its most popular flavor, to World Central Kitchen. This fundraiser is in effect for March 11 and 12 pickup dates; customers should preorder by March 4.

The local Polish American club is hosting a fundraiser for Ukraine on the night of March 5, with a raffle and silent auction featuring gift certificates donated by lots of local businesses, including restaurants.

For orders placed for March 5, 6, and 7 pickups, the Medford bagel shop is featuring World Central Kitchen as its “lox love” organization of the week. Goldilox donates $20 to its chosen organization each week, plus whatever is collected from customer orders: Customers have the option to add a contribution to their order to be donated to the weekly recipient. (No purchase necessary to donate, and no donation necessary to order bagels.)

For the weekend of March 5-6, Nightshade is donating profits from its Moon Rabbit cocktail to UNICEF in support of its work providing Ukrainian children with safe water, healthcare, and more.

On March 7, all Massachusetts locations of Kings will be offering a special $50 package of unlimited bowling (with shoes, pizza, and fountain drinks), with 100% of the proceeds donated to World Central Kitchen.

During the week leading up to Purim (Purim falls on the evening of March 16 to the evening of March 17 this year), Mamaleh’s will have hamantaschen available and will donate 10% of hamantaschen sales to the Polish Humanitarian Action in support of the assistance it is providing to Ukrainian refugees at the Polish border. It’s part of an international effort called Hamantashen for Ukraine.

Like Mamaleh’s, Blacker’s is participating in Hamantashen for Ukraine and is donating a portion of its hamantaschen sales this Purim.

Sofra is also participating in Hamantashen for Ukraine. For the week of March 7, the bakery will sell boxes of six chocolate sesame hamantaschen made with tahini, cocoa, and halva for $15, with all proceeds going to the Polish Humanitarian Action. The boxes will be available for walk-in orders at the cafe and preorders online.

The Brigham Circle Thai and Japanese restaurant is donating 10% of sales on March 18 and 19 to World Central Kitchen.

For the month of March 2022, Alcove is featuring a cocktail called Nightingale’s Flight, a riff on a classic Aviation named for Ukraine’s official bird and featuring a house-made citron vodka. $1 from each Nightingale’s Flight purchased will be donated to World Central Kitchen. “We all want to do something to show our support for Ukraine,” said principal bartender Will Piquette via press release. “Our team came together and agreed it was important to raise money to assist Chef Jose Andres and his miraculous WCK; his teams are already on the ground preparing hot meals for the Ukrainian refugees fleeing the assault. Together we created this beautiful cocktail which actually has the soft glow evocative of the Ghost of Kyiv (whether the ghost is real or urban legend); we support the Ukrainian people and their spirit.”

Aeronaut has partnered with the Federation of Beer and its Brew for Ukraine initiative to raise funds for CARE’s Ukraine Crisis Fund, releasing Red Eyes, a collaboration with Pravda Beer Theatre from Lviv, Ukraine. 100% of proceeds from Red Eyes will be donated to the cause. Aeronaut vendor and partner donations of ingredients and materials toward production of the beer have allowed the brewery to make an advance donation of $4000, with more to come.

The bakery is selling special cupcakes (order online) with 100% of proceeds benefiting the Save the Children Foundation, which is working to deliver humanitarian aid to Ukraine and beyond. Konditor Meister is also matching the amount raised.

Local spice company Curio Spice Co. has set a goal of a $5000 donation to World Central Kitchen. For each signature spice blend purchased at the $20 donation price or each Curio tote purchased, the company will donate $15. Local pickup and shipping are available.

The America’s Test Kitchen alum who now publishes his own “breaducational” newsletter is running a rolling bake sale over the next few weeks, offering several different loaves of bread for pickup in Central Square; find the full details here. All proceeds will be donated to Ukrainian relief charities; he hasn’t settled on which ones yet but mentions a few that are on his radar, such as World Central Kitchen, Caritas Ukraine Appeal, USA for UNHCR, and Sunflower of Peace.

The duo of European teahouses is donating a portion of sales to various organizations supporting humanitarian work in Ukraine. “This war is affecting us since most of our employees are from that region or have family ties there,” Crepes announced. “As an Eastern European restaurant we believe that we have a moral obligation to support the Ukrainian people during this difficult time.”

Tokava Coffee is helping raise money for the shop’s friends Tien Le and Tomek Duszyk, who are buying medical supplies not available in countries neighboring Ukraine and sending them to Warsaw to friends who are retired border guard officers. Donations are accepted via Venmo, and customers are also welcome to bring the requested medical supplies to the cafe (CAT tourniquets, emergency bandages, and Celox gauze). Donate to this fund or any organization supporting Ukraine and get a free filter coffee. Details and updates on Instagram. (Tokava is able to continue offering the free coffee thanks to donations from Tiny Arms Coffee Roasters in Lowell and Broadsheet Coffee in Cambridge, co-owner Natalie Gaida tells Eater.)

$1 from each B Strong lemon drop martini sold will be donated to Bstrong in partnership with the Global Empowerment Mission and its work in Ukraine.

In honor of a longtime Viale employee from Ukraine whose family is still there, Viale is encouraging donations to a fund that will go toward food, medicine, ammunition, and other necessary equipment for Ukrainians. The restaurant will also donate and match $2 from every Free Ukraine cocktail sold.

The company behind four local Russian and European grocery stores (the Newton one goes by the name Baza) has announced that it will stop purchasing and importing Russian products. “We are reaching out to you in these trying times not only as your local business but also as a part of your community that cannot remain ignorant to current events.”

Pitstop’s ownership is Ukrainian and has been sharing updates on social media, including several calls to action. For example, people can contact their local representatives and ask them to convey to the government that Ukraine needs protection, medical supplies, and military supplies. Plus, the National Bank of Ukraine has created an account that accepts deposits “for the needs of the military and civilians,” the Pitstop team posted, promising to post information about other organizations in the future.