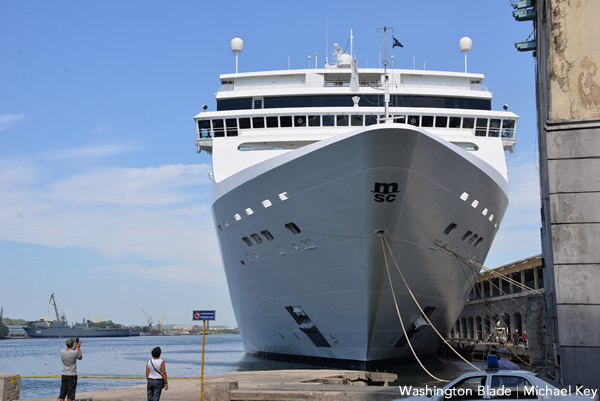 I will be blogging a number of times during my two-week transatlantic cruise and sharing my thoughts and experiences.

The first thing I found is boarding during a pandemic is a little different. People were given specific boarding times yet most arrived at the port when it was convenient for them as many had early check-out times from their hotel or Airbnb in Barcelona. Celebrity didn’t turn anyone away. There was no Wi-fi at the entrance to the terminal so things got a little complicated as many had the information needed on their iPhone Celebrity app. It worked out and when you got inside to the counter they shared a Wi-fi connection.

I knew in advance from a Facebook connection, some childhood friends whom I hadn’t seen in 21 years were going to be onboard. We ended up arriving at the terminal at the same time and caught up for the next hour and a half as we progressed through the boarding process. We all had to take a Covid test and only those with negative results could board. Of the approximately 1,300 people boarding, less than half the possible number for a full ship, I didn’t hear of anyone getting a positive result.

When my negative result came back I was allowed to board and went to find my stateroom on deck 11. The key was at the door with all my information on it. Celebrity was doing everything to limit crew-to-passenger contact. We were asked to keep masks on in all indoor spaces except when eating or drinking, which on a cruise is often, and the crew are all wearing masks. Luggage was delivered to the door.

Shortly after entering my beautiful stateroom there was a knock at the door and my stateroom attendant, Lenie, had come to introduce herself. She didn’t come in but explained how I could reach her anytime and for safety she would only come into the room when I was out. We chatted for a few minutes and I found out she was from the Philippines, had three children, and had worked for Celebrity for 20 years. She was both charming and efficient.

I then took a walk around the ship and was duly impressed. It is beautiful. I walked through the huge buffet where people were happily eating lunch and saw instead of serving yourself there were servers behind each station filling people’s plates. All passengers had on their masks when getting food, as did the crew serving them. It made for a very safe feeling.

Instead of a group muster each passenger was asked to go to their assigned muster station where you were met by staff who explained emergency procedures. You also had to look at a video on the Celebrity app and were then logged in and confirmed you had done so. All efficiently and safely done.

Then I headed to the sail-away party my travel agent, and friends, Scott Moster and his husband Dustin, were hosting in the Iconic suite. The suite has everything from a peloton cycle to a hot tub for eight. It is incredible. I had the chance to catch up with old friends I had sailed with before the pandemic. Then it was a quick tour of the spa and gym open twenty-four hours a day. A way to assuage guilt over all the food and drink. Then back to the stateroom to finish unpacking and change for dinner with good friends in one of the specialty restaurants, EDEN. That meant long pants and a shirt with a collar. That’s as formal as required on this cruise.

The food was superb and we got to meet the chef, Nicholas. An interesting guy who I will interview during the cruise. The menu was a combination of fresh fish, lobster, to filet mignon, all interestingly prepared.

After dinner it was a stop at the Martini bar where a large group of LGBTQ friends had gathered along with some who would become friends. I was surprised when a guy came over and gave me a hug. I didn’t recognize him with his mask on but turned out he was another friend from my past I hadn’t seen in years. It is clearly a small world and the gay world seems even smaller.

Finally headed to my stateroom around midnight, where turndown service had been done, to get some sleep and prepare for day two, and our first stop, Alicante.

Day two and three on the Celebrity APEX

Time flies when on a cruise; maybe it’s the endless food and drink. All passengers received a letter in their room telling us we would need to report for a Covid test on day 5 the first at-sea day before we get to the Canary Islands. I pre-scheduled mine just before what I planned as my first hour at the gym. I expect to go to the gym on all sea days and there will be eight of those.

Each morning I have had coffee, a bagel and orange juice delivered to the stateroom.  I always miss that knock on the door each morning when I am home but then I would miss my daily coffee at Java House so I guess it’s OK.

On day two we stopped at our first port, Alicante, on Spain’s Costa Blanca. I was truly surprised at how beautiful the city is. I joined friends for what turned out to be a three and a half hour walk as we were allowed off the ship on our own without booking a tour. We visited churches and the main market in town. We strolled along the beach and the harbor with great walking and bicycle paths. Alicante is a wonderful mix of old-world charm and modern amenities. One friend ventured up to the castle, Castillo de Santa Barbara, but since the elevator (the easy way up) wasn’t working and it’s a very long, steep climb up the mountain I passed. We arrived back at the ship around 1 p.m. and headed to the Mast bar on deck 14 for burgers and fries. Then some time back in the stateroom before heading to the martini bar for a drink and then to the beautiful APEX theater to see the Shamrock Tenors, four Irish performers who are not only talented but cute to boot.

We decided to try one of the regular restaurants, those not needing reservations and chose Normandy. The food was good and I had shrimp cocktail, rigatoni, and cherries jubilee for dessert.

After dinner it was up to the Rooftop Garden for ‘Silent Disco’. That is where you get a set of headphones with a few channels of disco music, and you dance to the music only you can hear. It’s really fun but by 11:30 my knees gave out and it was off to bed.

Day three dawned nice and sunny and we were docked in Cartagena, located in the autonomous of the region of Murcia. I had an 8:45 excursion and again had breakfast delivered to the room. We were instructed to head to the theater to meet the tour group and sign in for our ‘Journey to Murcia’. Murcia is a city in south-eastern Spain, the capital and most populous city of the Autonomous Community of the Region of Murcia, and the seventh largest city in the country, with a population of 447,182. It is about a forty-minute drive from the port. It is a fascinating city with an incredible history from the Romans to and Moorish influence. There is a beautiful cathedral, isn’t there one in every Spanish city? This being a national holiday in Spain most of the shops were closed saving some on the tour a lot of money. We strolled around the city with our guide giving us a running commentary on its history for about an hour and a half. She was a little hard to understand because not only did she have a heavy accent but she spoke really fast. But it was still fun and we did learn a lot. We made a second stop outside the city at another church where a wedding was being officiated. The bride was beautiful. Then we headed back to the ship for an early departure. Our tour was the last onboard and we sailed not more than thirty minutes after we got there.

Then it was off to the captain’s reception. I had the chance to chat a few moments with the Captain Panagiotis Skylogiannis, who is as charming as are most Greek men. We also met the rest of the senior crew who run the ship. Many said they would be more than happy to sit and get a cup of coffee with me during our at-sea days so I can interview and write about them.

Then it was back to my stateroom again to prepare for another tough night of food and drinking. We went to see Andrew Derbyshire in the theater for the 7:30 show and then to dinner at Cyprus.   After dinner Celebrity hosted the first LGBTQ+ event of the cruise at the EDEN bar. A large crowd showed up, not all gay but they all knew where the fun people would be. The entertainers all showed up there as including the Shamrock Tenors, four talented Irish guys and Andrew Derbyshire, a British actor and singer. We chatted and I will meet him for coffee to do a column on him.

Then about midnight it was back to the stateroom for what some of my friends on board called an early night. Morning would have us docking in Cadiz and we had a private tour planned for over 20 of the people who had booked the trip with Scott Moster, travel agent extraordinaire, taking us to the city of Seville.

Peter Rosenstein is a longtime LGBTQ rights and Democratic Party activist. He writes regularly for the Blade.

My first vacation since the pandemic began 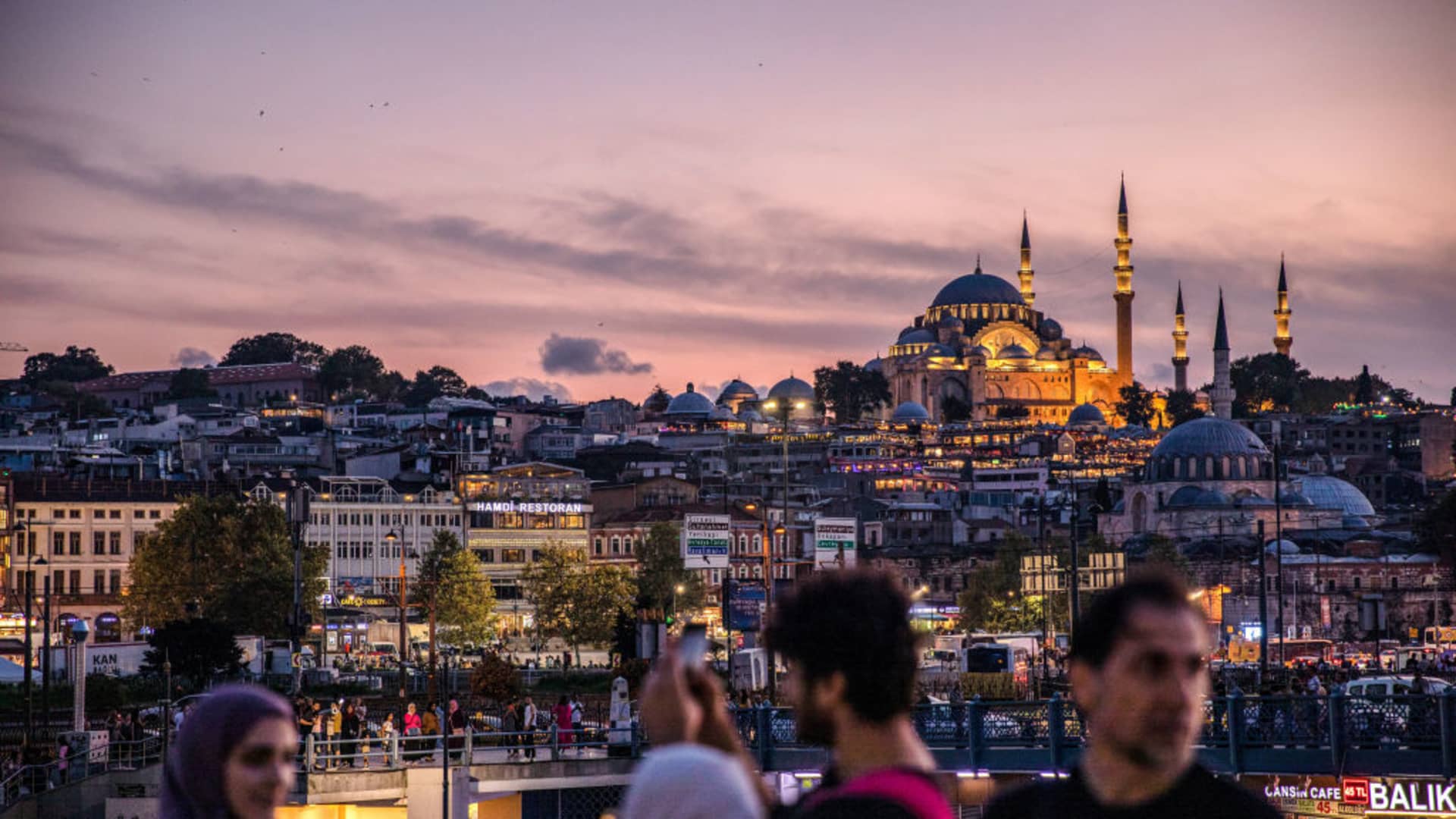