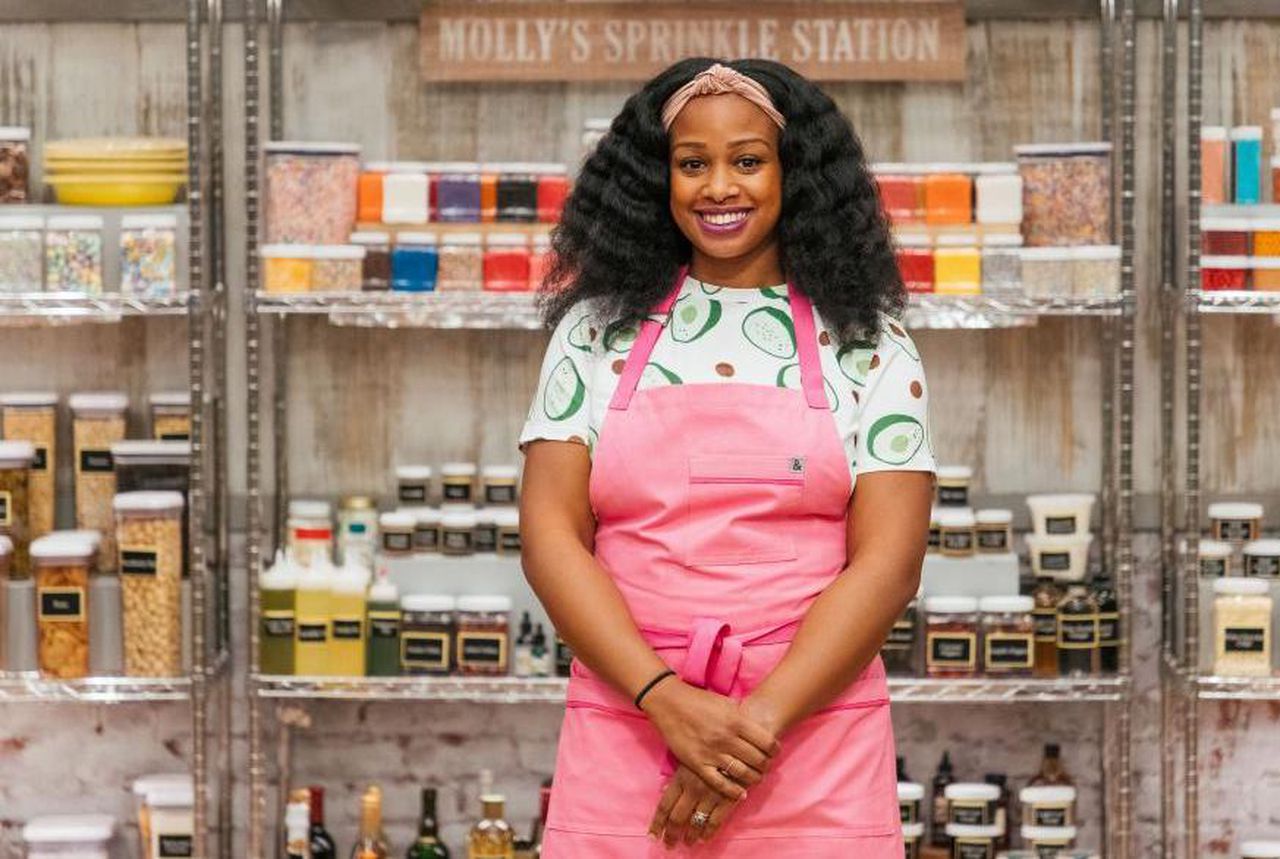 The timing couldn’t have been worse when Jaleesa Mason got the invitation to compete on Food Network’s “Spring Baking Championship.”

She had just given birth to her daughter, Olive, and was still on maternity leave from her pastry shop. How could she just drop everything, 11 weeks postpartum, and go to Tennessee to film a reality competition with 11 bakers?

“It was insane,” Mason tells NJ Advance Media. “It was the biggest reason why I didn’t want to do this show.”

But when she told her husband about the offer, he had a different response:

Almost a year later, she’s glad she took his advice. Mason impressed judges with her ornate spring wedding cake in the finale of the competition, which aired Monday night, and walked away with not only the title of Spring Baking Champion, but also $25,000 (minus taxes).

And she left with something else: The knowledge that persistence can pay off, especially when you think you’re down and out.

The Bloomfield pastry chef is the Jay in Mo & Jay Pastry, the French bakery in Little Falls that she co-owns with her husband, Mohamad Al-Kassem. She also makes custom cakes as Sweet Memories by Jaleesa.

To be sure, the baking competition wasn’t all sprinkles and sugar. There were moments when leaving the competition early seemed like the most practical course of action, Mason says. Like in the second episode of the show, when she reached a breaking point.

She was still breastfeeding and pumping every few hours, but had skipped dinner the night before and didn’t eat enough that day to sustain her energy through hours of baking challenges. On top of everything else, the baking wasn’t panning out.

During a Mardi Gras-themed challenge in the episode, which aired in March, Mason’s madeleines didn’t rise properly and she had to hustle to make them again. If that wasn’t enough, her second batch got stuck to the mold after baking and freezing. Later, when she was in the middle of preparing a vanilla cake with bourbon soak and praline buttercream, she had a panic attack.

Mason had to stop everything and get checked out by the show’s medic. But she didn’t walk away. She stood up and started again. Her fellow bakers rallied to support her, applauding the comeback. The judges cheered her tenacity. One of them, Nancy Fuller, said Mason’s nut filling was the best she ever tasted.

“It says ‘praline’ seven days a week,” she said, affirming Mason’s decision to stay in the game.

Mason initially didn’t like that her panic attack was captured by cameras. Later, she heard from viewers who thanked her for showing vulnerability.

At Mo & Jay Pastry, “Spring Baking Championship” has proven to be a tasty, interactive exercise in food TV, especially for customers. Mason has been whipping up her recipes from competition challenges the week after each show.

The results were more than decadent.

In the meantime, Mason had to conceal the fact that she won for months on end — not just from the public but her husband, too. Yes, even while living together and running the business.

“I can’t go buy all the Champagne because then he’s gonna know,” she said before the finale aired.

Mohamad sported a #TeamJaleesa shirt at the bakery.

“I have a terrible poker face, so I hope he hasn’t figured it out yet,” she said.

The Jersey baker’s road to Food Network glory started in Spanish Harlem, where she grew up. In high school, she switched paths from aspiring surgeon to pastry dreams. Mason had an internship at a hospital and realized medicine just wasn’t her thing. She enjoyed baking, but the art of professional pastry-making seemed too out of reach — she thought she would need connections to get anywhere in the business.

At the urging of those close to her, she decided to apply to culinary school. While enrolled at the Culinary Institute of America in Hyde Park, New York, she studied abroad in France, where the aspiring sugar artist took a class in sugar work. She didn’t know the course would be taught in French, but she was able to catch on by closely watching the instructor. On her second trip to France, she made lobster tail pastry, went foraging for herbs and met MOFs, or recipients of the Meilleur Ouvrier de France, a vaunted honor for French pastry chefs.

In 2014, six months before she graduated and just before she turned 21, Mason met Mohamad, a chef classically trained in France. They were both working for the French bakery chain Maison Kayser in its New Jersey commissary — he was executive sous chef, she was a pastry cook.

The couple started a business in 2016 selling gourmet madeleines wholesale out of their Hackensack apartment. But they discovered a demand for eclairs, so their French repertoire expanded. Soon they were also supplying macarons, tarts and financiers.

“When they DMed me, I thought it was spam,” she says.

Then they called … and kept calling.

Locals have been supportive of Mason’s run on “Spring Baking Championship.” A council member visited the bakery to tell them the town was hosting a finale watch party Monday at the Little Falls Civic Center in Mason’s honor.

She beamed when she learned she would be making a three-tier “heirloom” wedding cake in the final round. The confection was to feature an embroidered design with plenty of piping — one of her specialties.

“My strongest suit is wedding cakes,” she says.

Mason plans to invest the $25,000 she won in bakery equipment.

“Our goal is to get a second location for a commissary so we can have much more space to produce,” Mason says of the pastry shop. Further down the line, they’d like to expand to a second storefront.

Mo & Jay has been a family affair since Mason and Al-Kassem opened the doors in November 2020.

“We didn’t have child care up until a month ago,” she says. “My kids have literally been born and raised into this bakery.”

Their son, Charlie, 4, is the resident taste-tester. For his birthday in January, his mother made sure he got a custom Megalodon shark cake modeled after the Monster Jam truck.

The bakers deploy Charlie to figure out which flavors kids will like best.

“Our eclairs are our biggest sellers,” Mason says.

And talk about flavor. Their 12 options range from fruit to chocolate and nuts. Pistachio is a bestseller. So is the bakery’s Nutella-stuffed cookie.

Mason largely avoids using food dyes by sticking with natural ingredients, like when she used actual hibiscus to make her hibiscus cake deep purple on the show. Judges praised the results.

“This. Was. Outrageous,” Fuller said of the cake.

Mason’s children were on her mind when she considered leaving the competition in the penultimate episode.

She was sure she would be sent home for her mistakes anyway, like an under-baked cheesecake (the oven was too hot, so she had to pull it out or the top would burn). But she remembered what happened when she had the panic attack — how she would have missed out on so much if she called it quits in the second episode.

“I wanted my kids to see that, too,” she says of sticking with it. “I was thinking about them.”

“I also want to get back into teaching,” she says — namely, sharing her skills icing cakes and working with gum paste.

Mason had never competed in anything baking-related, let alone televised, before the Food Network series. The experience stretched and refreshed her skills.

“A lot of those flavors on the show, I’ve never done before,” she says.

Making a Japanese cheesecake was daunting because she had never attempted it. She also had to temper chocolate for the first time since culinary school.

Going through those trials only strengthened her resolve, Mason says:

How to watch: Food Network’s “Spring Baking Championship” can be seen at watch.foodnetwork.com, Discovery Plus or the Food Network Go app.

Thank you for relying on us to provide the journalism you can trust. Please consider supporting NJ.com with a subscription.

Amy Kuperinsky may be reached at [email protected] and followed at @AmyKup on Twitter.