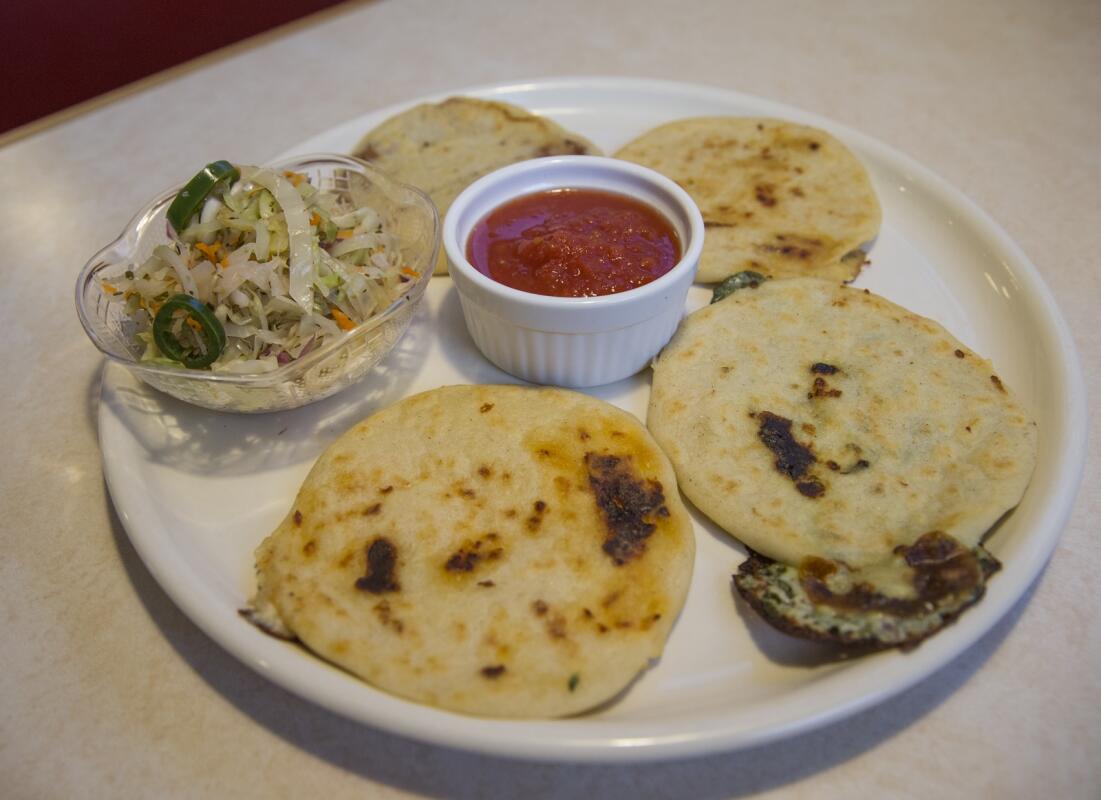 The pupusas are a specialty dish that highlights the flavors of El Salvador and come in a variety of choices such as cheese and pork shoulder at Rosy’s Salvadoran in Cedar Rapids. (Savannah Blake/The Gazette)

The Salvadoran enchiladas are a fresh and unique spin on the traditional Mexican dish at Rosy’s Salvadoran in Cedar Rapids. (Savannah Blake/The Gazette)

The plantain canoe is a decadent dessert that is the perfect balance of sweet and comfort at Rosy’s Salvadoran in Cedar Rapids. (Savannah Blake/The Gazette)

A variety of dishes served at Rosy’s highlight the unique and exciting flavors of El Salvador at Rosy’s Salvadoran in Cedar Rapids. (Savannah Blake/The Gazette)

CEDAR RAPIDS — When Rosalia Chavez came to America from El Salvador in 2006, her now brightly painted restaurant on 16th Avenue SW is the picture she had in mind.

Thanks to that vision, Rosy’s Salvadoran & Mexican restaurant has opened in Cedar Rapids, bringing what may be the first taste of the Central American cuisine to the city. It is currently Cedar Rapids’ only Salvadoran restaurant.

“All my life, I dreamed about a restaurant,” she said, since the time she made tamales with her mother as a child.

The dream has been in her family for generations, but the former nursing assistant was the first one to make it happen.

Details: Open for carryout or dine-in

After seeing the building at 2201 16th Ave. SW for rent, she realized it was “the opportunity I always wanted,” and moved her family from Iowa City to Cedar Rapids three months ago to make it happen.

“It looked like the restaurants I knew at home, where you can see into the kitchen,” she said.

The interior of the restaurant offers lots of seating and bright colors at Rosy’s Salvadoran in Cedar Rapids, Iowa on Tuesday, Oct. 12, 2021. (Savannah Blake/The Gazette)

The restaurant was formerly home to Happy Dogs and More. Rosy’s opened there Sept. 10 after renovating the inside. The only original item that remains from the last restaurant is the Pepsi machine, said Rosalia’s son, Julio.

Alongside Julio, 16, Rosalia’s family works together to run the entire restaurant. Her husband Pedro Chagala, helps cook in the kitchen, with years of cooking experience at former restaurants like Takanami.

The renovations to transform the inside of the restaurant took nearly three months before they were able to open in September. The inside now offers plenty of seating and bright colors at Rosy’s Salvadoran in Cedar Rapids, Iowa on Tuesday, Oct. 12, 2021. (Savannah Blake/The Gazette)

But usually, the restaurant’s signature Salvadoran item, pupusas, are left to Rosalia, who shapes by hand the thick cakes from a family recipe passed down over generations.

The savory, flat pieces of grilled dough are filled with beans, cheese and your choice of meat and vegetables: squash, chicharron (pork), chicken, jalapenos or spinach. Part of the secret to a good pupusa, they said, lies in how long they’re cooked — the optimal pupusa is crispy on the outside without being overcooked on the inside.

Julio said many Hispanic customers have found comfort in Rosy’s, which is closer to home than North Liberty and Iowa City, the next closest cities with pupuserias.

Alongside the pupusas at Rosy’s are tamales, carne asada, carne guisada — a meat stew with a tomato base and potatoes — seafood options, fajitas, Salvadoran and Mexican enchiladas, and tacos.

It’s not spicy like other cuisines in Central America, such as Mexican food — but what it lacks in heat, it makes up for in savory flavor.

In addition to pupusas, plantains are a big part of Salvadoran cuisine. At Rosy’s the banana-like fruit is even incorporated into the dessert menu.

The plantain canoe is where sweet meets savory, as a ripe plantain is fried and filled with a homemade pudding then topped with cinnamon and raisins.

Other desserts, like their empanadas, put a sweet twist on foods you may be used to seeing in savory ways. At Rosy’s the empanadas are filled with pudding, fried to a crisp and covered in sugar.

Other dishes you see on a Mexican menu are also served slightly different in El Salvador. At Rosy’s, tamales are wrapped in banana or plantain leaves instead of corn husks.

A lot of Salvadoran food is eaten with the hands, not silverware. With that custom in mind, Julio admits he may forget to hand a customer their silverware every now and then.

Though cooking full time is a world away from cooking at home for her family, Rosalia said what she sees now is the better life she has striven to provide for her family.

Even when she’s tired, though, she knows it’s worth it, she said. Like many immigrants before her, sharing a taste of home is her way of achieving the American dream.