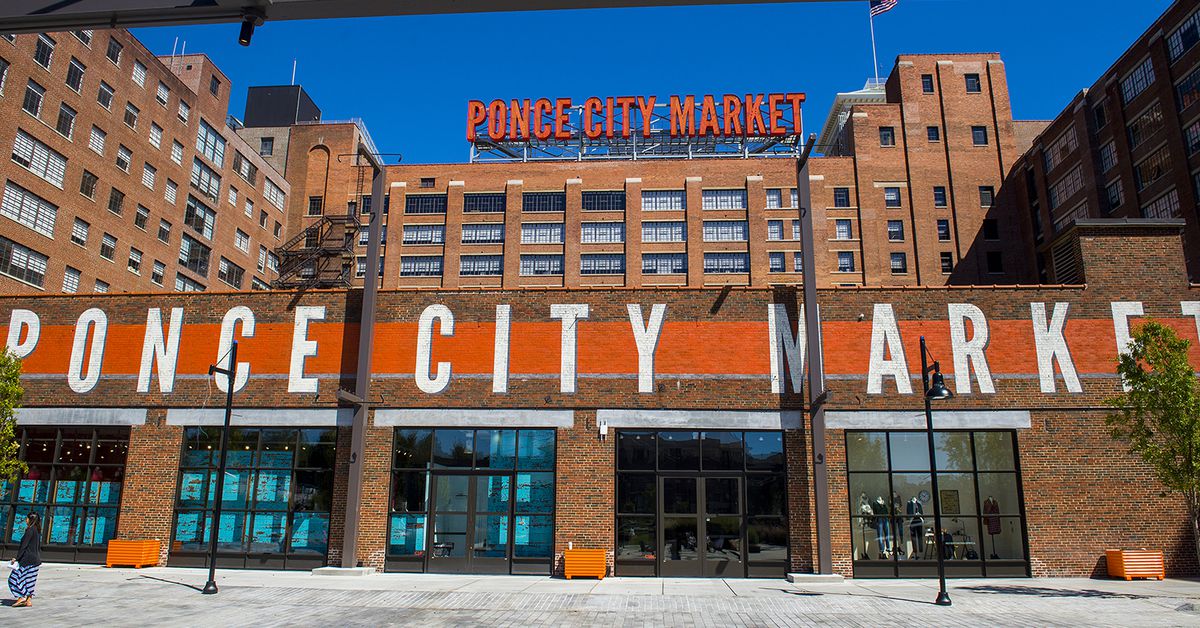 Atlanta and its surrounding suburbs are currently experiencing a food hall boom, beginning nearly eight years ago with the openings of Krog Street Market in Inman Park and Ponce City Market in Old Fourth Ward. At the time, both food halls bookended the first portion of the Eastside Beltline trail and were novelties for Atlantans driven by their interest in food. Now, with the further expansion of the Beltline westward into Reynoldstown, Glenwood Park, and West End, and ubiquitous mixed-use developments popping up all over metro Atlanta, the food hall has become big business here.

Since 2014, food halls have taken root inside and outside the perimeter, including in suburban Atlanta cities like Marietta, where Krog Street Market’s cousin, aptly named Marietta Square Market, now resides. Even the home of Braves baseball, Battery Atlanta, includes a small food hall centered on Asian fare from area restaurateurs. More food halls are planned for Atlanta’s suburbs, its exurbs, and neighborhoods around the city.

Food halls often anchor entertainment districts part of larger, mostly banal developments, sometimes providing an affordable entry point for independent chefs and food entrepreneurs, giving them an opportunity to open a business without the innumerable overhead costs of owning a standalone restaurant. But what distinguishes one food hall from another? Some people simply consider these glorified mall food courts. Others believe food halls are more than that, offering people cocktails and craft beer from a full-service bar and restaurant stalls focused on local food from enterprising chefs. Whatever the reason for the recent surge in openings or how one defines these culinary marketplaces, it appears food halls are here to stay in Atlanta.

Eater rounded up the food halls now open around the Atlanta area, those planning to open over the next year or two, and a big expansion set to take place at the city’s largest and most well-known food hall. Check back for updates.

Unlike the other food halls listed, the owners here see Ph’east as more of hawkers market serving a variety of Asian fare and street foods from several local restaurateurs, including Thai, Cantonese, ramen, poke, and bubble tea. There’s even a full bar here.

The Market Hall at Halcyon

Part of the redevelopment of Tech Square, this tiny food hall packs in some serious local talent, including stalls from Atlanta chefs Kameel Srouji and Hector Santiago and a forthcoming bar from the owners of Joystick Gamebar and Georgia Beer Garden.

The newly opened Politan Row food hall includes 11 locally owned food stalls, along with a central bar and a hidden cocktail bar called Jo Jo’s Beloved. Stalls here serve food ranging from Vietnamese and pizza to burgers, tacos, and Caribbean fare. There’s the option to reserve a chef’s table experience, too. A sliding glass wall separates the food hall from the outdoor spaces at the Colony Square food hall, with covered patios and an events lawn in the Grove.

We Suki Suki and the Global Grub Collective

Owner Quynh “Q” Trinh doesn’t consider her pioneering collective of stalls a food hall. Rather, Trinh sees the Global Grub Collective as a restaurant incubator for enterprising chefs and food businesses. The Collective offers people looking to break into the restaurant industry an affordable entry point, only asking people to incorporate their businesses as LLCs and come with their own liability insurance. Stalls rotate often at the Collective, but have included restaurants like Lifting Noodles Ramen, Poke Burri, and Mushi Ni, whose owners first found success here. Trinh also operates her own stall at the Collective, serving pho and bánh mì from the front of the market via We Suki Suki.

While defined as a public market rather than a food hall, the historic Municipal Market (known locally as Sweet Auburn Curb Market) on Edgewood Avenue does include 10 food stalls and a bakery owned by local chefs and restaurateurs. The building is leased from City of Atlanta, with vendors sub-leasing space inside. As for food, expect everything from vegan tacos, chicken sandwiches, and pizza to soul food, cheesesteaks, and Afro-Caribbean fare here. The market, which opened in 1918 as an open-air farmers market, followed by the opening of the current building in 1924, also sells freshly butchered meats, seafood, and produce and includes a gift shop and a cooking school.

Six new food and retail stalls open soon in the expanded portion of the central food hall, including a stall from Vietnamese restaurant Vietvana and a rotisserie chicken stall called Nani’s Rotisserie Chicken from Chai Pani and Botiwalla chef Meherwan Irani. The expansion adds an additional 5,000 square feet to the first floor of the food hall.

The Hall at Ashford Lane

The Hall at Ashford Lane, which should open in the coming months, will include a variety of food stalls, 3 bars, private dining areas, and a general seating area once open. Taking over the former Henredon Furniture store at Perimeter Place on Olde Perimeter Way, the Hall at Ashford Lane will also offer full table and bar service. Owner Jamal Wilson and the Vigor Group may be looking to open a second food hall in Snellville, too.

This six-stall food hall dubbed Southern Feed Store should open this fall inside the former Graveyard Tavern space along Glenwood Avenue. The food hall takes its name from the feed store that once occupied the building from 1927 until the 1940s. Look for food and drinks from Woody’s Cheesesteaks, Buteco, Waffle Bar, and Gyro Gyro here. Pellerin Real Estate, the developer behind the Beacon in Grant Park, partnered with Rafael Pereira in the EAV food hall. Pereira owns Brazilian coffee and cocktail bar Buteco, which first opened at the Beacon in 2018.

Robert Montwaid, the co-founder of Chattahoochee Food Works in northwest Atlanta, plans to open this food hall next year at Underground Atlanta. The food hall serves as the anchor tenant for the downtown Atlanta landmark. Billed as a “boutique food market”, the yet-named food hall will include 21 stalls and joins live music venue the Masquerade and Future Showbar, an LGBTQ-friendly restaurant, cabaret, and dance bar.

Opening next spring, this food hall joins restaurants, breweries, offices, and retail shops now open at or planned for the Lee and White complex along the Westside Beltline. Housed in building 1020, the yet-named food hall will feature a mix of 13 food stalls, a central bar in front opening to a large patio, and full-service restaurants, like the second location of Lake and Oak Neighborhood Barbecue, owned by chefs Todd Richards and Josh Lee.

Located in Duluth and part of larger development project in the Gwinnett County city, this food hall will eventually include 12 food stalls with food ranging from hibachi and wings to Thai and tacos. The property will also feature 14 restaurants and food shops and a location of Top Golf.

Mercantile Hall at Olive and Pine

Little is known about the plans for this south metro food hall, other than it will feature “chef-driven” food stalls. The food hall joins Sensu Sushi, Honeysuckle Gelato, Barleygarden Kitchen and Craft Bar, Hop City Craft Beer and Wine, and Amici Italian Cafe, along with forthcoming Woodstone Bakery and Cafe, and restaurant Braise, owned by Mushi Ni chefs Tanya Jimenez and Michael Le.