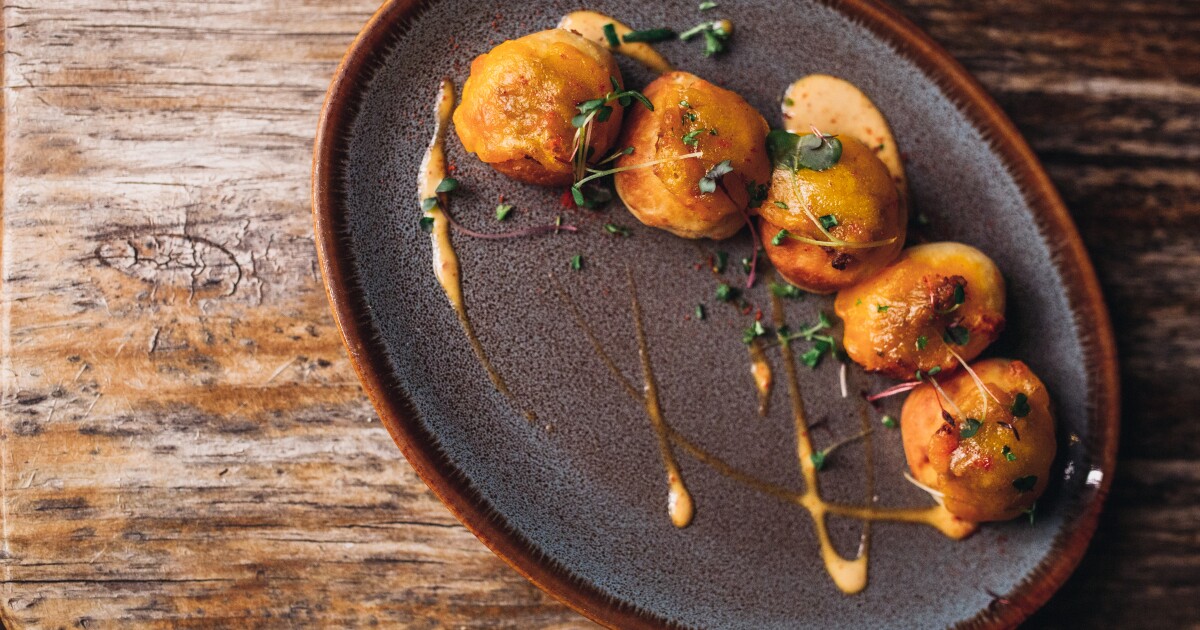 This story is published in partnership with Life & Thyme.

It’s a creamy, cheesy, mountain of noodles capped with a golden crisped top. It’s a bowl of wilted greens, cooked for hours in a fatty, porky broth. It’s sweet potatoes further ameliorated with hints of brown sugar and dots of marshmallows. Soul food is many things, but perhaps most clearly, it’s a food genre defined by history, culture and faith in spite of oppression.

“Soul food has its roots in Southern food, and so much of it is about adaptation, about people wanting the food they find comfort in, no matter where they are,” says Lowcountry chef and food writer Amethyst Ganaway.

Soul food is often typified by limited examples. Images of greasy, deep-fried chicken, buttery dishes and fatty pork are often solely associated with the cuisine. Yet, historians, chefs and authors know these dishes are a snippet of a vast and diverse cuisine that reflects different regions, religious groups and communities.

Learn more about the complexity of African American foodways in Houston, Texas on “The Migrant Kitchen.” Watch this preview.

“In the beginning of my culinary career, I did not want to use the [phrase] ‘soul food’ because I was afraid of getting pigeonholed in that category,” shares Harlem chef and FIELDTRIP owner JJ Johnson. “But as I educated myself more on my family history and the food of the African diaspora through my travels, I realized that at one point in life, all Black people could celebrate was soul food. I understood that I should celebrate my family lineage through traditional family recipes, but with my own spin.”

Johnson, like many other chefs, has interpreted his food and heritage through his various culinary experiences and restaurants. Today, in Harlem and other Northern cities, soul food is largely defined by descendants of those who moved during the Great Migration, a period that saw six million Black Americans relocate from the South to the North in an effort to escape a unique brand of bloody, Southern racism. And on the West Coast and throughout the United States as a whole, chefs like Bryant Terry and Jenné Claiborne have undoubtedly increased interest in vegetables and plant-based soul food cuisine.

In the American South, where soul food originates, the cuisine is characterized by regionality. One might enjoy a hearty, tomato-laden bowl of red rice (a Lowcountry, Gullah Geechee creation) in South Carolina. While Black Americans in Texas and Louisiana will likely see traditional dishes like turkey necks, fried seafood, macaroni and cheese, and greens emblazoned across menus at restaurants throughout the region — many of which will likely claim to have the best soul food in the world.

Soul food, a term used to describe Black American Southern food, was coined during the 1960s and 1970s when the term “soul” became a rallying cry and unifier for Black Americans weary with anti-Blackness, inequality and violent white supremacy. Its roots, however, can be traced to 1619, when the first group of enslaved Africans set foot in the United States. These Africans intermingled with Indigenous groups and learned European culinary techniques. The dishes that emerged varied. Some, like cornbread and shrimp and grits emerged from the rations enslaved people were given to consume while working on plantations and the hunting, farming and garden-tending some of the enslaved people were able to do.

Others, like macaroni and cheese, sweet potato casserole and fried chicken, emerged over time. From the gardens that enslaved people nurtured to the newfound financial opportunity during the early days of emancipation, Black Americans created dishes that became — reductively — synonymous with Southern cuisine, like jambalaya, sweet potatoes and okra gumbo. In fact, although soul food is solely Black American, “Southern cuisine,” which is often considered the food of white Southerners, exists because of African influence and Black American ingenuity.

When the Great Migration happened, the cuisine of the Black American South traveled north, and restaurants like Sylvia’s in Harlem and Florida Avenue Grill in Washington, D.C. became respites for African Americans looking for a taste of home. Black American cooks were known for their culinary intellect and expertise with spices, creating a whole new genre of food that became available across the country, recognizable by a self-declared term.

Religion played a key role in the proliferation of soul food, as well as the diversification of the cuisine. Black churches, crucial during slavery and in the Civil Rights movement, were also crucial as gathering places, where Black communities could eat and rejoice over plates of chicken and dumplings, black-eyed peas and rice, red drink, and the classic Black American church dish, fried catfish and spaghetti. While many who grew up in the Black Southern Baptist tradition recall enjoying greens cooked with ham or bacon, others like Ganaway, who grew up in a largely Muslim household, recall a different way of enjoying food.

“We ate a lot of produce and a lot of seafood, but we didn’t eat a lot of red meat,” says Ganaway.

Ganaway didn’t grow up eating pork, and instead enjoyed dishes like collard greens without the traditional pork flavoring. Ganaway’s grandmother practices Sufi Islam, and continues to be influenced by various cuisines within the Islamic faith. Her grandmother worships with many West Africans, where Ganaway has noticed various spices specific to the region at regular Jum’ah, where congregants bring dishes from their homeland. A dish from West Africa will be near a pan of macaroni and cheese. “You see those cross-cultural things happening on the table,” says Ganaway.

Elijah Muhammad, the leader of the Nation of Islam, was a strong proponent of encouraging healthy diets, the use of produce, and a distance from pork within the Black community. During the 20th century, the number of Black American Muslims increased rapidly as civil rights leader Malcolm X invoked a belief in liberation and Black power. During, and alongside cultural and lifestyle changes, many Black American Muslims adopted a diet they believed reflected the plant-based, less meat-heavy diets of their African ancestors.

“With regards to foodways specifically, choosing their own diet represented the power to better control the state of their individual health and their community’s health,” Salahu-Din says. “Adhering to some Islamic guidelines and recommendations from Muslim leaders, such as Elijah Muhammad, who wrote ‘How To Eat To Live,’ they modified the traditional soul food diet — heavy in salt, fat and sugar — to reflect their awareness of health and wellness.”

Salahu-Din asserts the importance of regionality, noting Muslims in the agricultural South often grow their own food that’s common to the area, and Muslims near inlets of the Chesapeake Bay incorporate various types of fish into the bulk of their diets. In major cities, however, some Muslims practice urban gardening to supplement diets that rely heavily on food stores.

The bean pie is one such dish that tells such a story. Created as an alternative to the beloved African American dessert, sweet potato pie (many Muslims believe that sweet potato is difficult to digest), bean pie consists of mashed navy beans, various spices and eggs. Likely created in the early 1900s, the dessert has become a mainstay in communities. It can be found in some Black Muslim-owned bakeries, like Abu’s Homestyle Bakery in Brooklyn, New York. For chefs like Ganaway, retaining the Muslim origins of such dishes is imperative to expressing the full story of Black American foodways.

“African American Muslims are already kind of low on the totem pole, even in the Islamic world,” Ganaway says. “So it’s important to recognize our influence on the culture and foodways in America.”

Soul food is diverse, rooted in survival and cultural building in its past, expansive in its future. It is, moreover, foundational to America’s claim to be a place of diversity and inclusivity, a claim unfulfilled, yet dutifully influenced by the contributions of Black America.

“We cannot leave soul food behind,” says Johnson. “We are the new generation and have to keep it alive as it is the foundation of American food.”